A Ploughman's Lunch (For Dinner) 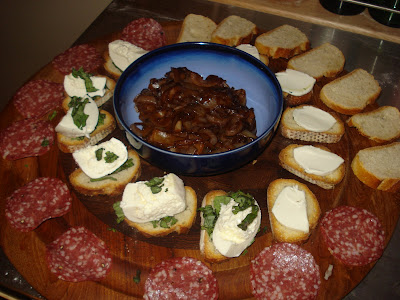 Years ago my friend Erik and I were sitting around on the first weekend of fall without baseball, a mile high in the Rockies, trying to decide what to do. After dismissing several ideas, none of which I remember, he suggested making ourselves a ploughman's lunch and going on a tour of the Coors brewery in Golden, finishing with the two complimentary beers they give you in the hospitality lounge. This sounded like a fantastic idea, although I had to ask the meaning of ploughman's lunch. (With Erik this could have meant anything; it could have been a euphemism for getting drunk and stealing a snowplow.)

"It's just bread and cheese," he said, "like a man working in a field with a plow would pack for himself." Oh.
So we packed up a couple cheeses and a hunk of bread and headed down to Golden. It was a fantastic time. After lunch and our free beers we stopped at the Golden City Brewery, which, as near as I could tell, was a couple guys brewing beer out of their house. Regardless, they filled a growler for us for about 8 bucks and invited us to drink in their front yard. (Their brewery's slogan is "The 2nd Largest Brewery in Golden" - one of the most charming slogans I have seen anywhere in America.)
In the years since, I have frequently ordered a ploughman's lunch. The Horse Brass Pub in Portland, one of my favorite pubs in the West, has a ploughman's and an "English ploughman's" (I think the difference is that the English has more types of cheese.) A few years ago in Minneapolis, after a day of sailing on White Bear Lake with my friends Dave and Min - an August day as perfect as any I have ever had - we ate lunch at O'Donovan's Irish Pub and I ate the single best ploughman's of my life. In addition to the cheeses, it came with pickled sweet onions, homemade brown bread, and all the Colman's mustard I wanted (for no additional charge, unlike some places I could name.)
Tonight, Elizabeth and I had an idea of going to Fresh & Easy to buy groceries and perhaps going by In-n-Out on the way. But she got stuck at the office late so we abandoned that idea. Over the weekend she hosted a wedding shower and there were still plenty of cheeses in the fridge, so I got the idea of putting together a spread before she got home.
I sliced up a couple sweet onions and sauteed them in balsamic vinegar. I ripped off a few pieces of bread and sliced the rest, toasting them lightly in the oven. On top of a few of the pieces I added some goat cheese and others I added burrata with basil. I spread a few slices of Italian dry salami around the platter. Once I saw how pretty it looked I decided to take a picture. It tasted even better than it looks.
Posted by JustinM at 10:07 PM