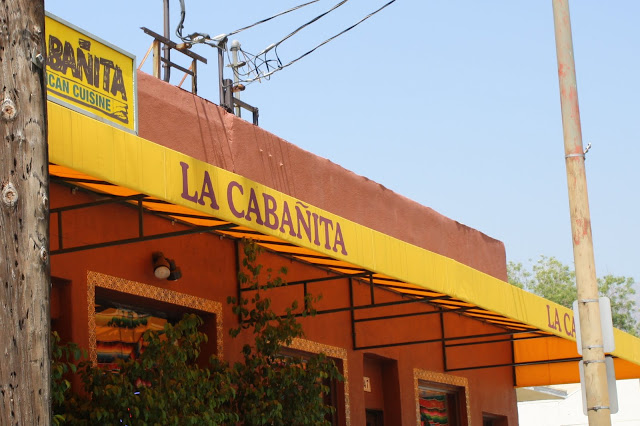 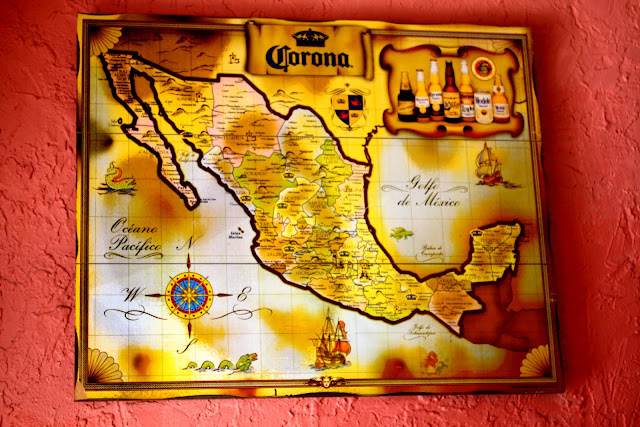 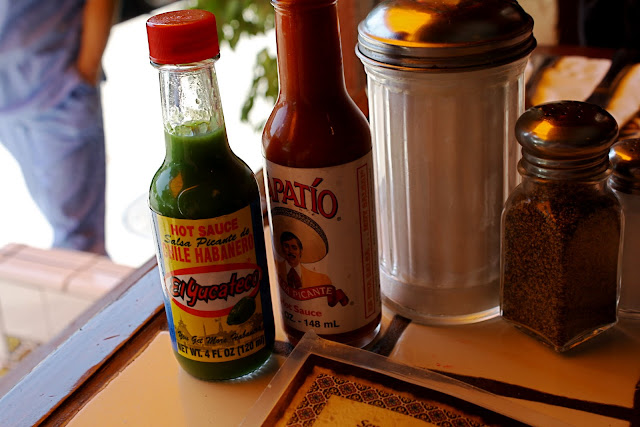 A few weeks ago, my friend Carla heard some of us talking about La Cabañita, the great Mexican restaurant near Montrose. I told her it was probably my favorite Mexican restaurant, skewing more towards the Mexico City and Yucatan-style food that I love (and away from the Mexican pizza and sizzling fajita plates that I do not) and I told her the next time she had a weekday off I would go with her.
The other day we both headed up to Montrose for lunch. It was just a few minutes after noon and the restaurant was less crowded than I have ever seen it. (By the time we left an hour later, it was packed.) 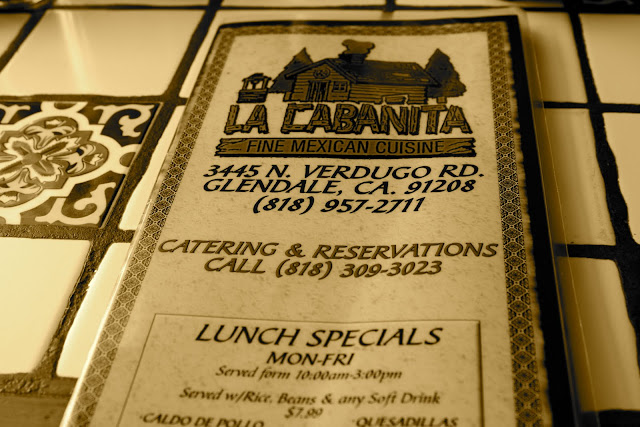 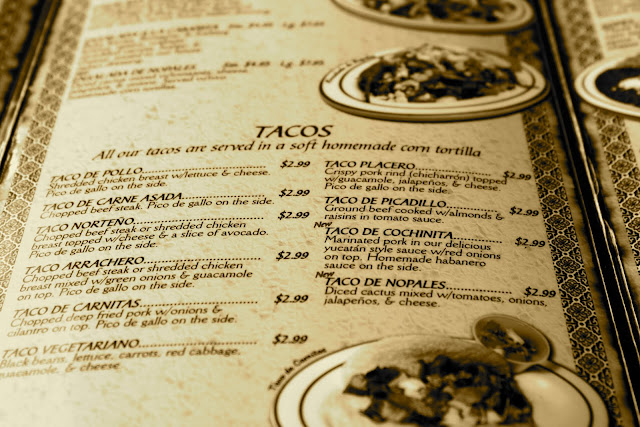 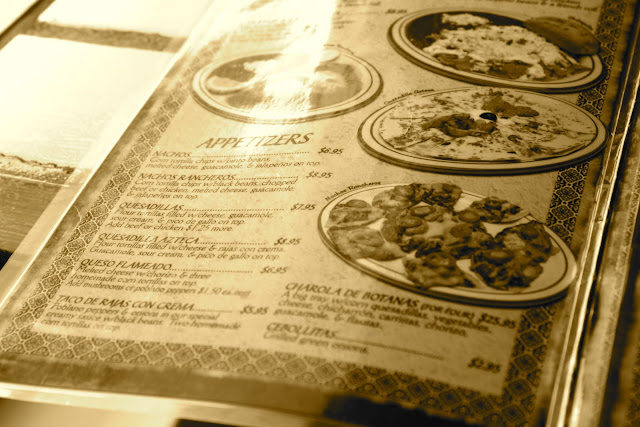 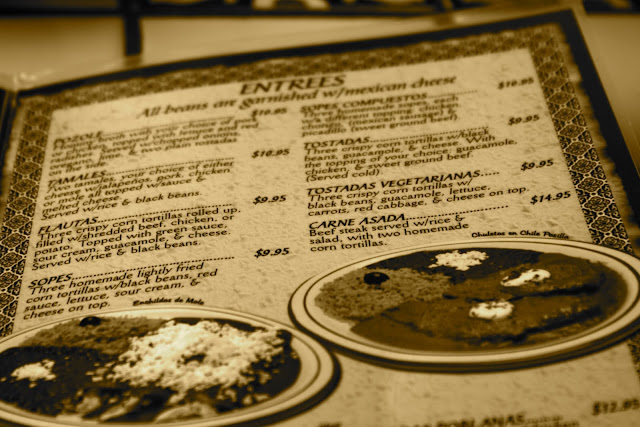 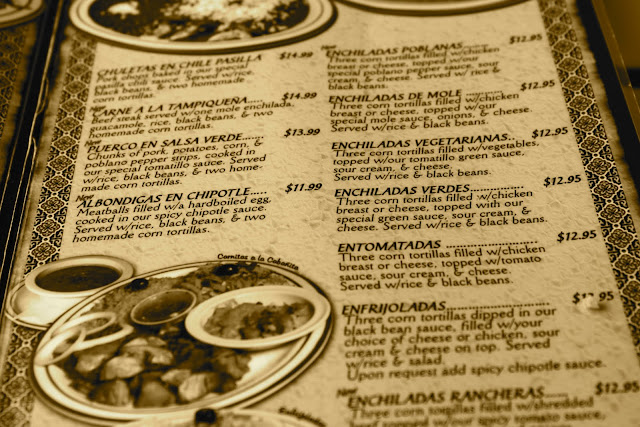 Two years ago, when I wrote about The Counter, I mentioned that Carla is a very sweet person but not the right dining companion at a place that features thousands of possible combinations. This reared itself again at La Cabañita; she spent at least fifteen minutes studying the menu, saying "I don't know what to get" no fewer than six times. 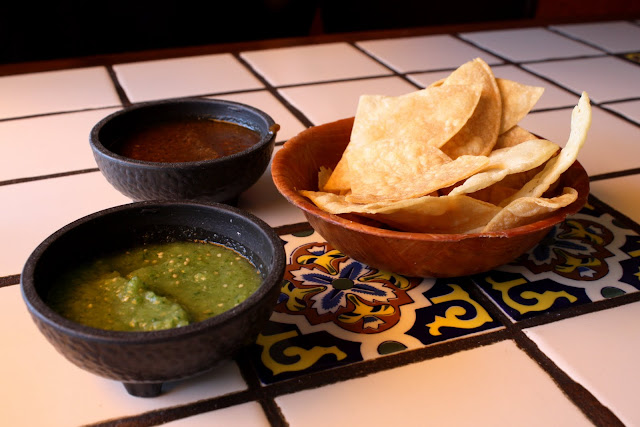 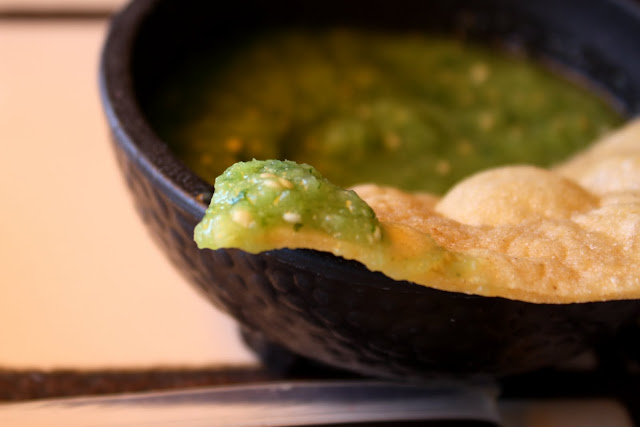 The chips and salsa at La Cabañita are better than at any restaurant I have ever had. The red, smoky salsa is wonderful; the green tomatillo salsa is even better. While Carla was perusing the menu, I inhaled an entire bowl of chips. (The bowls aren't large but the chips are thick and warm and a few of them here are the equivalent of an entire basket at most chain restaurants.) 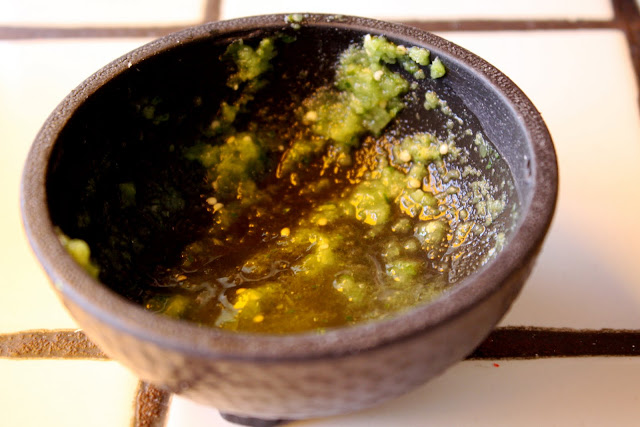 I finished off the green salsa in no time. 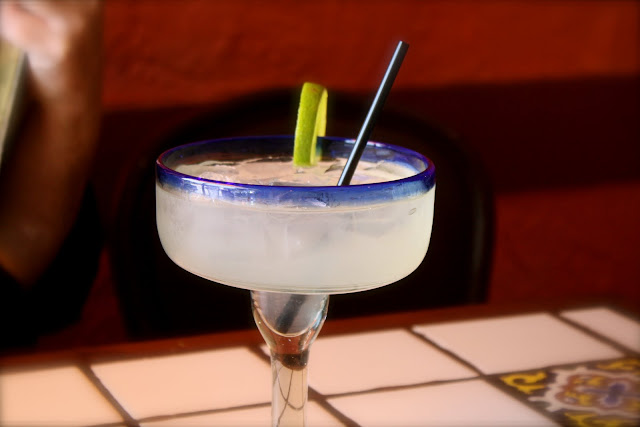 Carla had a margarita; I stuck with water. It always surprises people when I tell them this, but I have never once had a margarita. I've had sips of other people's over the years, but I've never ordered one. 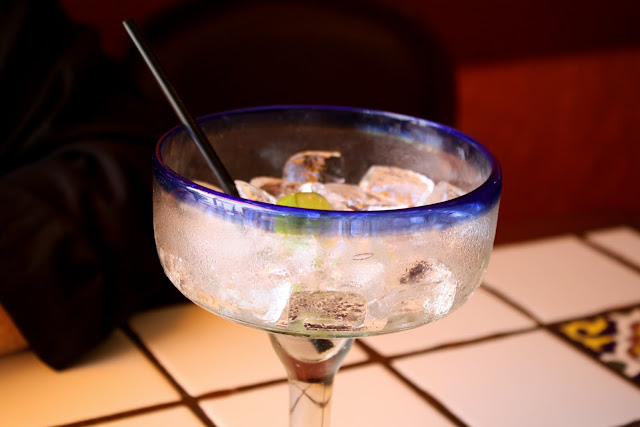 Carla finished her margarita about as quickly as I finished the salsa. 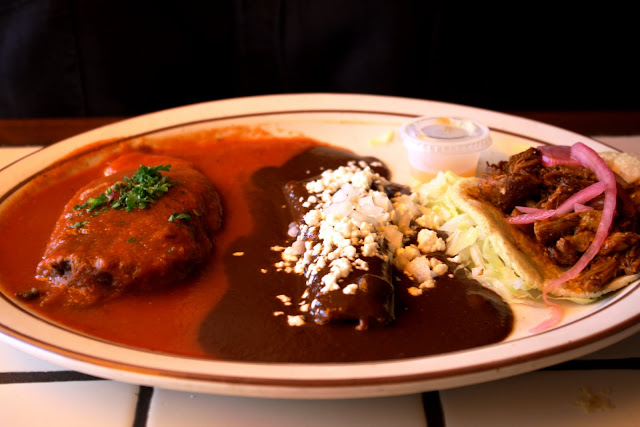 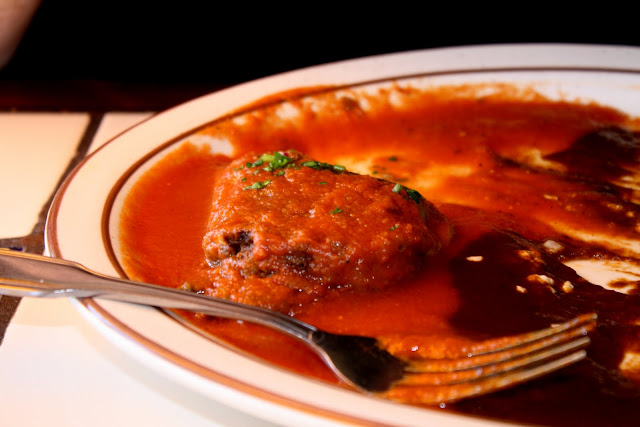 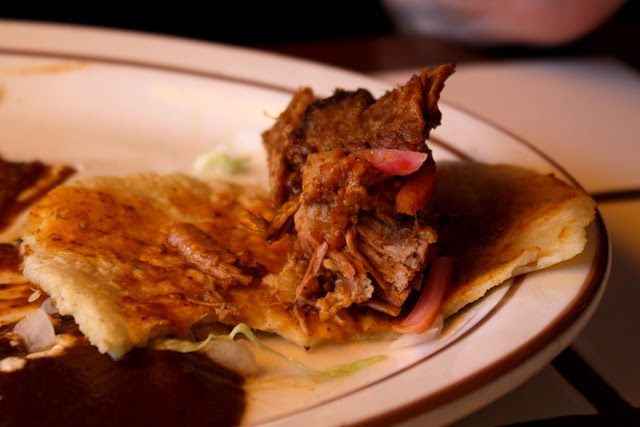 This is what Carla settled on: one chile relleno, one cheese enchilada with mole sauce, and one cochinita pibil taco. She enjoyed all of them, although she didn't finish the chile, claiming that she made a mistake in ordering two items that are primarily cheese.

"Well, maybe you didn't take enough time looking over the menu," I suggested. 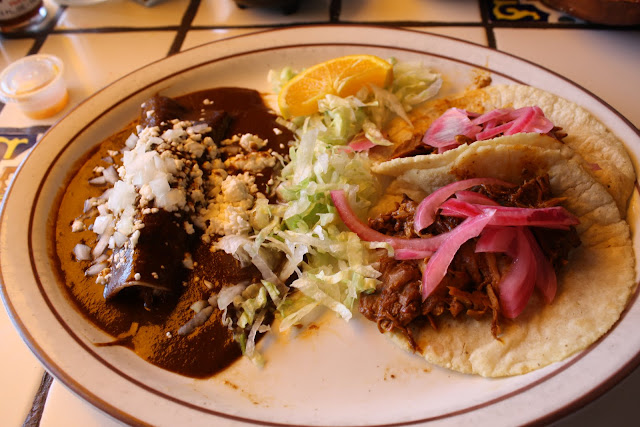 This is what my standard order is at La Cabañita: one chicken enchilada with mole sauce and two cochinita pibil tacos. 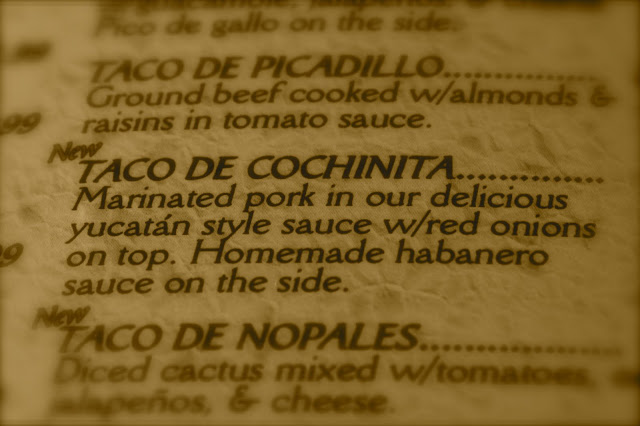 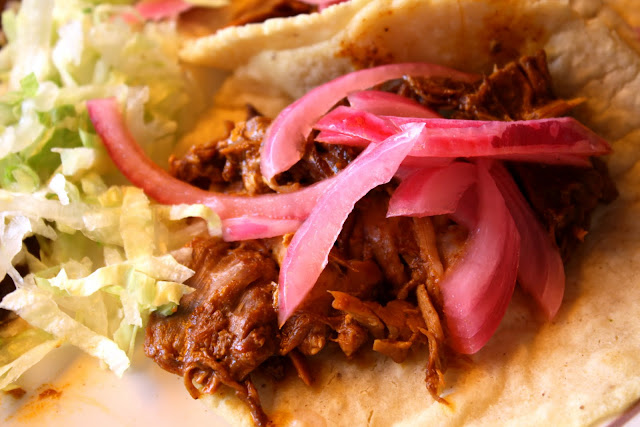 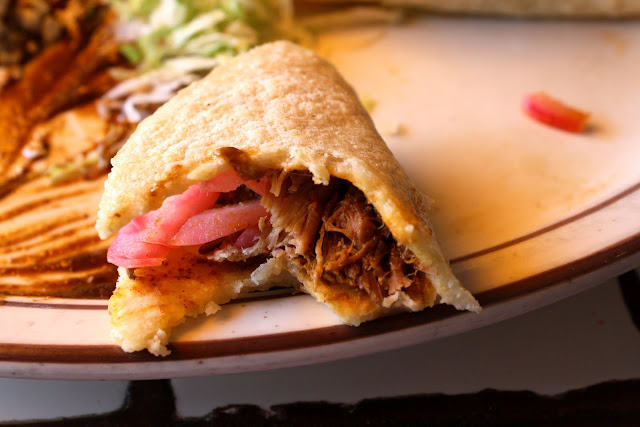 In the past I have called these cochinita pibil tacos the best tacos I have ever had, and on their best days, they truly are. But this wasn't one of those days. The pork was good as always, but the marinade was a little too salty and not quite citrusy enough to be called great, and the tortillas were a touch stale. Still, they were better than almost any tacos you can get elsewhere. 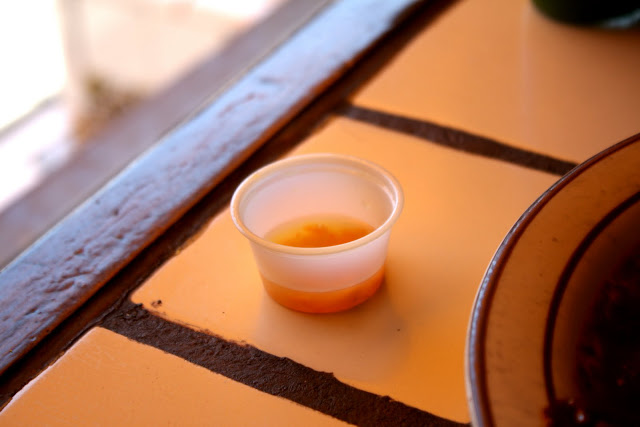 The servers always give a warning about the heat level of the habanero sauce that comes in a thimble-sized container with the cochinita pibil, but I always use it all up and I don't find it particularly spicy. (Although I have a high tolerance for heat, I am not one of those chili-heads who chew jalapenos like they're candy. Every once in a while I come across a sauce that is just too hot for me, but this isn't it.) 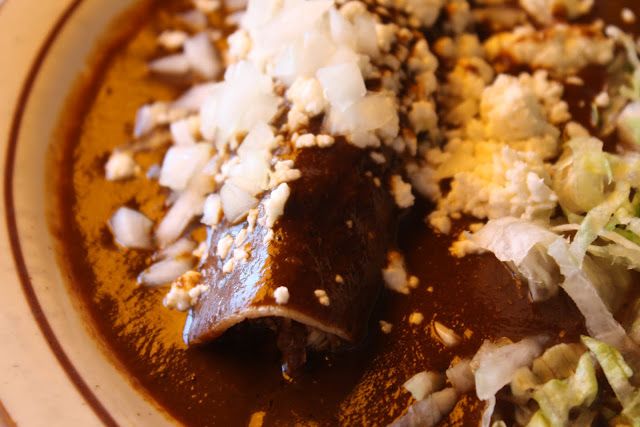 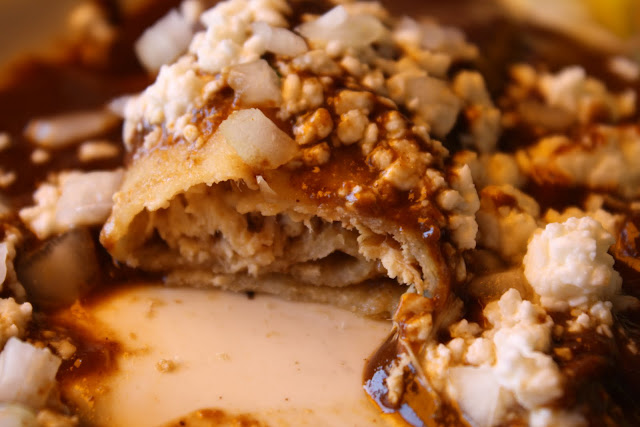 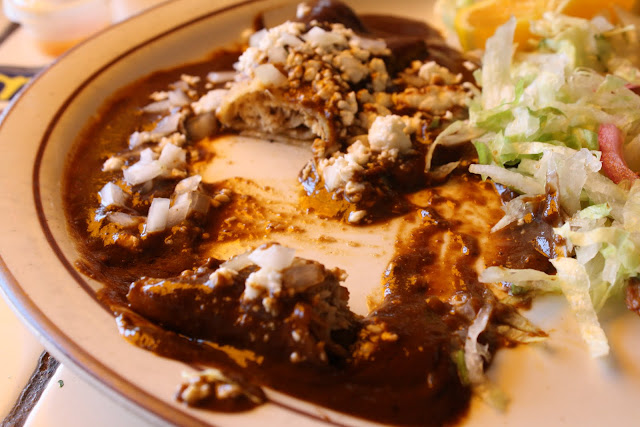 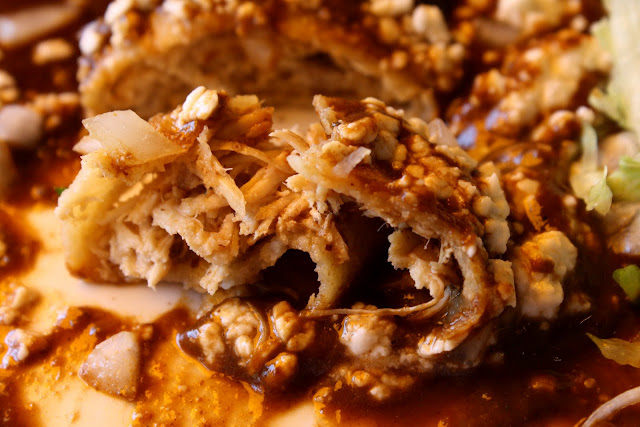 La Cabañita's mole sauce is my favorite that I have ever had. I admit I am not an expert on moles; more often than not I find them either too sweet or tasting burnt. This one is perfect: not too spicy and not dominated by the chocolate flavor.

Like every meal I have had here, I was stuffed when I got up from the table. (We actually took a walk around the block just to get the blood moving.) But I am already anxious to return for more.

La Cabanita is to Mexican restaurants as Langer's is to Pastrami joints.
Why, oh why, are there so few who really get it?
Maybe we should boycott other restaurants until they see the light? Nah, it'll never work - mediocrity is too easy to achieve.

I was not aware that La Cabanita had pork pibil tacos, but it has been a number of years since Kelly and I have been there. This is despite the fact that it is one of her favorite Mexican restaurants. I was a big fan of the chicken pibil tacoos at Merida in Pasadena, but that was a long time ago. They were probably the best I have ever had.

On a totally different note, Rick's is alive and well, now known as "Bobby's Place". It seems to be off to a great start. Word is that they will be adding breakfast in short order.

Well, the menu does say they are "new"... although it said the same thing a year ago, so I don't know exactly what their defintion of new is.

I certainly ate at Merida, but it closed when I was 23... so I didn't take pictures of my food, didn't own a digital camera, and probably wouldn't have ventured beyond eating shredded beef tacos or something. (Even when Sol y Azul was there and my eating was more adventurous, I really only ordered the fish tacos.)

I havent even looked at the menu except for you accidental shot of "tacos de nopales" which I would order with 200% accuracy. What? No marg??? por que? Glad to see there are some hot spots on Montrose, too.

The Brunch Ride went to La Cabanita a couple months ago and we loved it. I like the green salsa and fluffy chips. We may have to head in that direction again this Sunday…

Anna: Nah, I'm a beer and wine guy. Maybe once a year I have something else. And margaritas are just... well, I feel like they are just vehicles for people to get themselves drunk faster and easier. There doesn't seem to be a whole lot of enjoyment that goes into the process, which is what I love most about drinking. It's like for two minutes people are like "Oh this is tasty"... and then all of a sudden they're drunk.

Mindful: Yes, I suppose if I broke up the meal in the middle of two long bike rides I would not have been as stuffed as I was.