Pizza & The Last Days of Summer 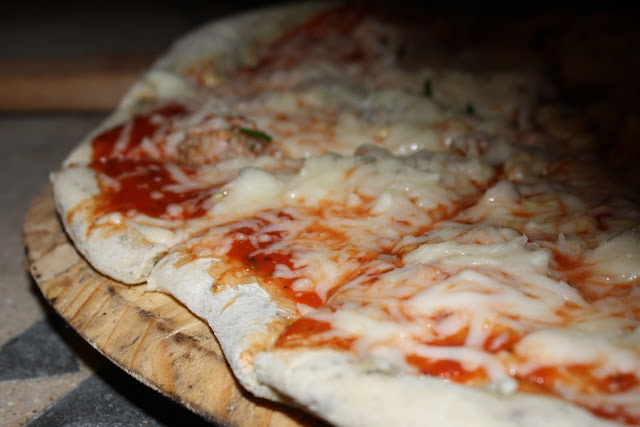 For half a decade now, my friend Tracie and I have been able to pinpoint - often independent of each other - the moment when summer ends. Not summer in the literal definition; there is always around a month of that left from the time we make our declaration. And not even strictly the feeling that summer is completely over: there is still plenty of baseball left, though football is beginning to dominate the sports talk. And there are still plenty of hot days left; last year the hottest day of the year was September 27th. (It was actually the hottest day ever recorded in downtown Los Angeles.)

But I'm talking about the feel of summer, specifically the light. The rays of the sun don't shine through the window the same way, the reflection off the hardwood floor looks a little different. The air at the farmers market seems a little heavier, the light that shines off the produce as the sun sets seems a little more golden.

It usually occurs sometime between the 20th of August and the end of the month. So I figured one more night of pizza on the grill would be fun while there's still some light left at 8PM. I invited over the usual suspects, plus my brother: he had asked me if I wanted to go to La Cabanita on Thursday night, I had told him I already had plans but he should join me. I told him about the special pizzas I was making.

"That sounds disgusting," he said.

My brother can be harsh sometimes. But I rarely get to see him anymore, so I welcomed him coming over.

(I don't get to see him much anymore because he's so busy with work. But I'm still not entirely sure what he does, other than ride zip lines through walls of paper towels.) 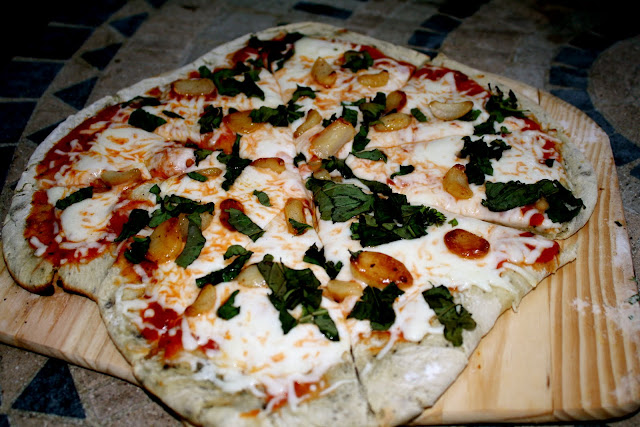 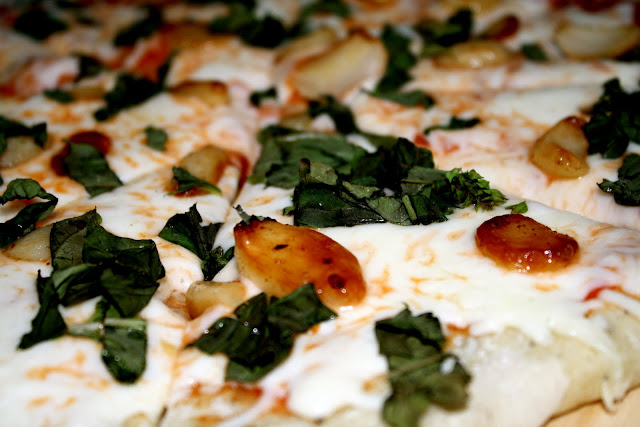 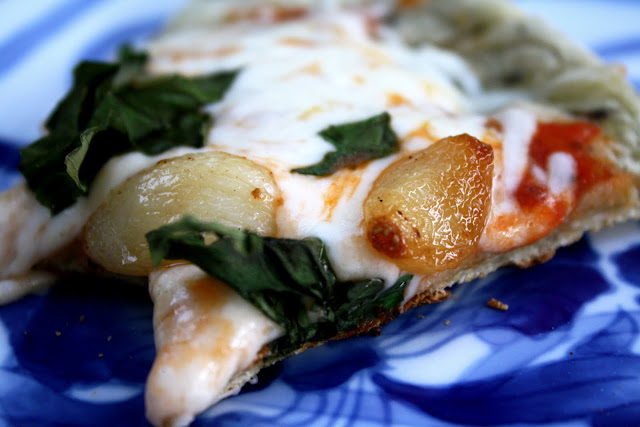 The first pizza I made is my usual favorite: roasted garlic and basil, on a garlic-herb crust. I had roasted the sweet cloves of garlic earlier in the afternoon; the basil I picked from my parents' garden. This pizza was great, as always, but we're just getting warmed up. 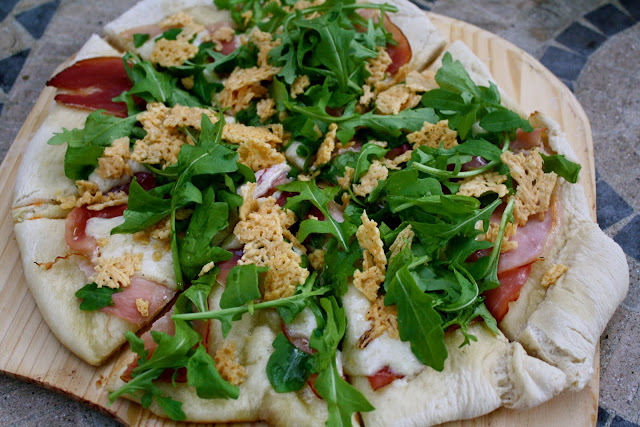 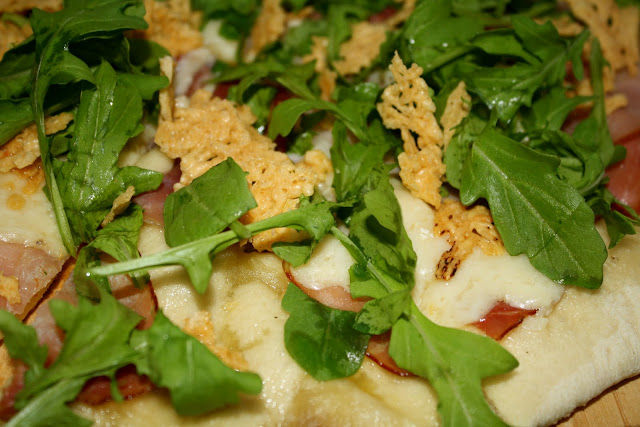 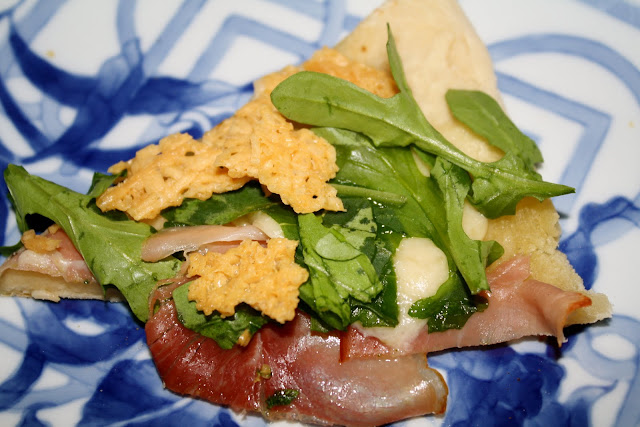 For the next pizza I used an olive oil base, layering on prosciutto and Trader Joe's "Toscano with cracked black pepper" cheese. Once those melded together on the grill, I took the pizza off and topped it with arugula and Parmesan cheese crisps. I really enjoyed these flavors together: the saltiness of the prosciutto, the pepper of the cheese, the earthiness of the arugula and the crunchiness of the cheese crisps. I will absolutely make this pizza again, although next time I will use a higher-quality prosciutto - this one was just too salty. 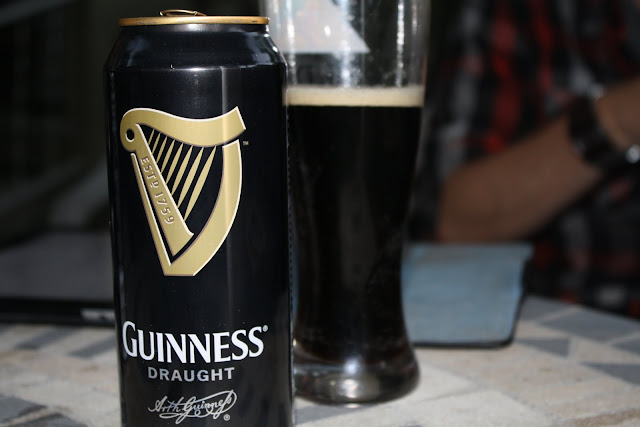 Thankfully, my brother and his buddy Nick brought cold cans of Guinness, which helped wash away the saltiness. 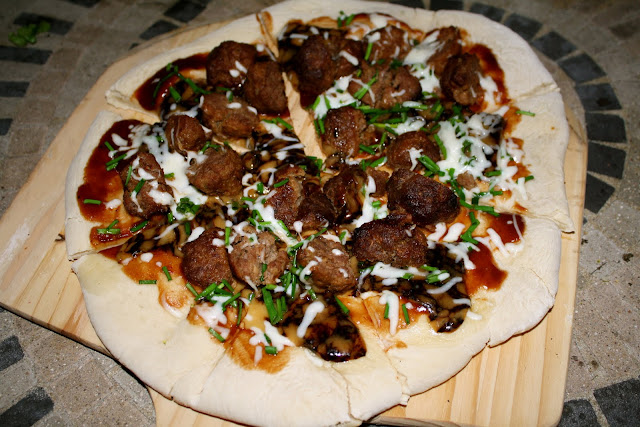 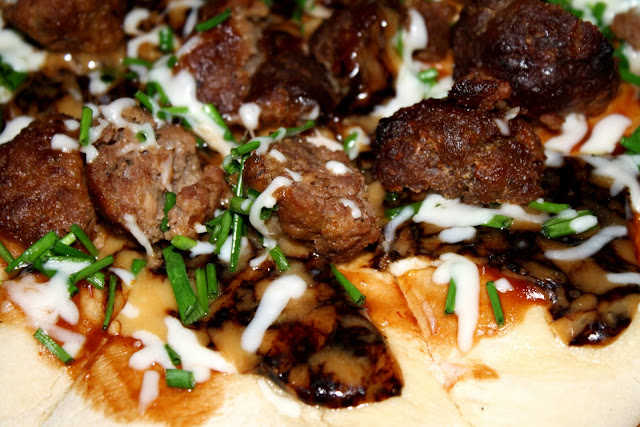 Now we're getting into the heart of the beast: for several hours I slow-cooked meatballs in a broth of Guinness. The smell was heavenly. When it was time to assemble the pizza I put a homemade whiskey-barbecue sauce on the dough and used slices of Cahill's Irish Porter cheese: cheddar with ribbons of porter in it. I then placed my balls on the pizza, topping them with some sprinkles of mozzarella and chives.

Tracie's face lit up when she saw this pie: "I love when I get to put your balls in my mouth," she said. Yes, we're in our 30s. 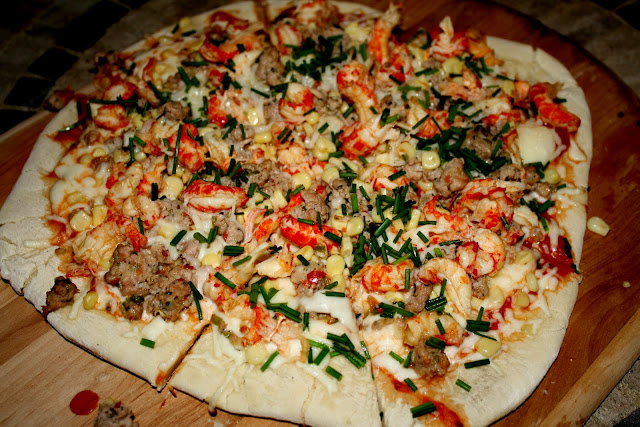 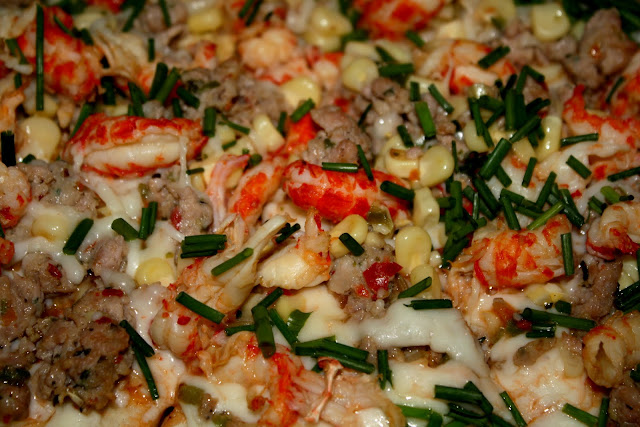 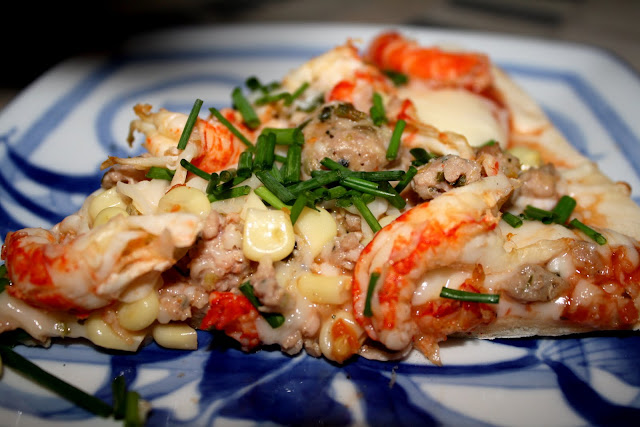 A couple of months ago, Tim told me that he'd never had crawfish before. I made it a point to remedy that. (Although apparently I am the outlier: Tracie revealed last night that she never had them either, and Carla mentioned that the only crawfish she'd ever eaten were the fried variety we enjoyed together on a New Orleans vacation a few years back.)

When I was in New York last summer and tried Two Boots Pizzeria at the request of a reader, I noticed they had a pizza with crawfish and spicy sausage. That combination sounded wonderful, although I didn't try it then, as the reader had also requested that I try the "Mr. Pink." But I made a note to one day make a similar pizza.

So I took some spicy Italian sausage and cooked it in the wok with sweet corn. I placed that on the dough with mozzarella cheese, and topped it with crawfish and chives. It was one of the best pizzas I've ever had.

"There are so many flavors going on here," Tim said. And he meant it in a good way. Then he mentioned Trappey's hot sauce. 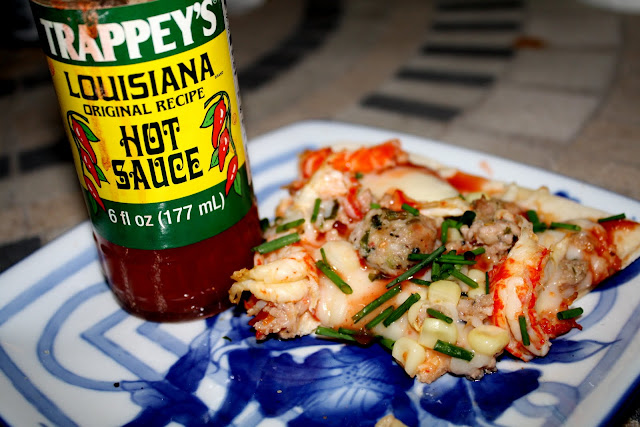 Yes. I didn't think the slice could be improved upon, but Trappey's did it. 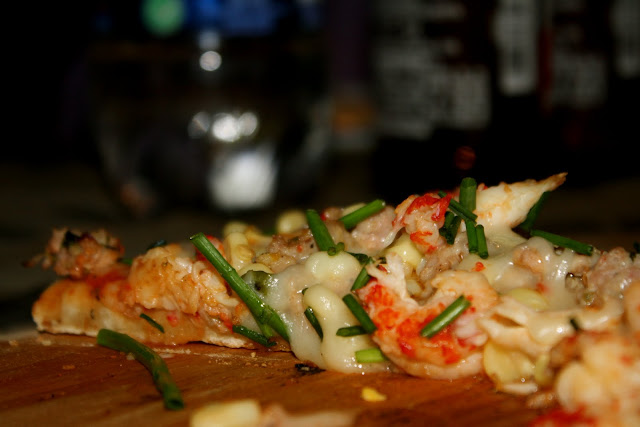 Everyone was getting pretty full at this point, so one slice remained, and I'd planned to eat that for lunch today... but honestly, as I write these words at 8:15 in the morning, I'm thinking it's going to be my breakfast instead. 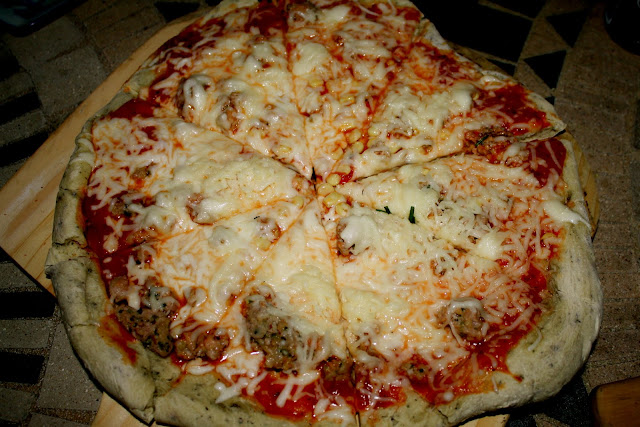 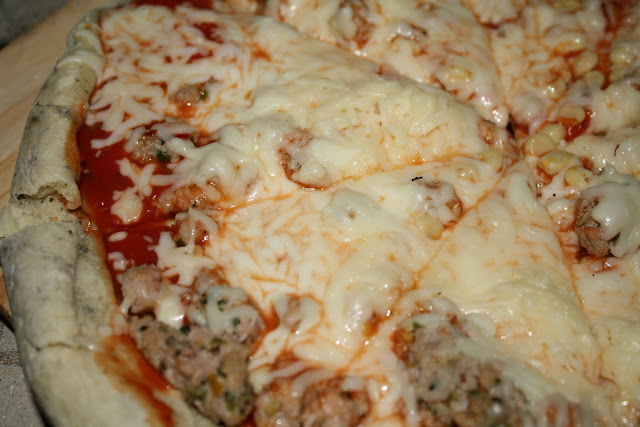 Despite most of us already being full, there were still two pizza crusts left. "What would you guys like?" I asked the table.

"One with sausage and corn but no crawfish," Travis said. (My brother doesn't like seafood, although he claims "I do like it, I just don't like to eat it," as if that is some kind of a distinction.) I was happy to make that, on a garlic-herb crust. I did not try any last night but there are some slices left, so maybe that will be my lunch.

(By the way, as you can probably guess, I don't ever get tired of pizza. Yesterday afternoon, after I'd rounded up all the ingredients and was considering what to do for lunch, I thought Well, I have all these ingredients, I might as well make a pita bread pizza.) 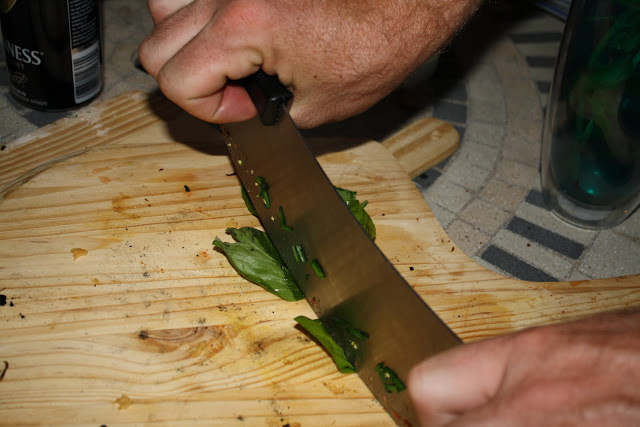 For those of you who like it when my brother takes action shots, here's a twist: an action shot of him chopping basil for his sausage pizza. 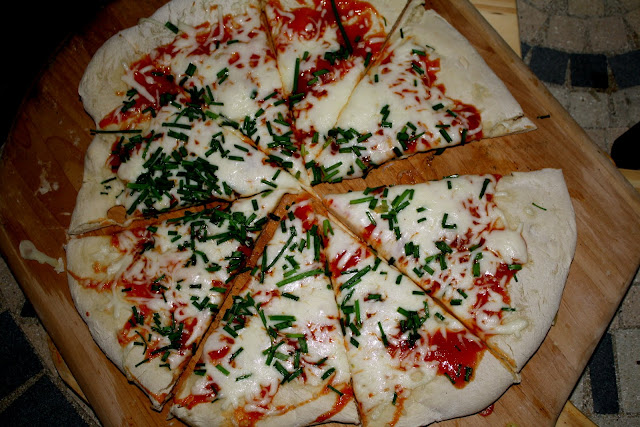 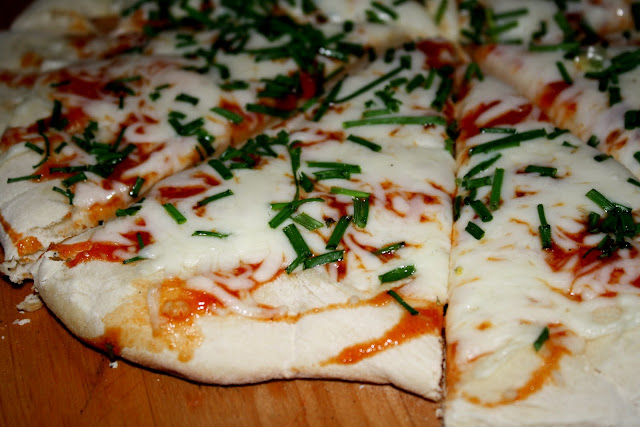 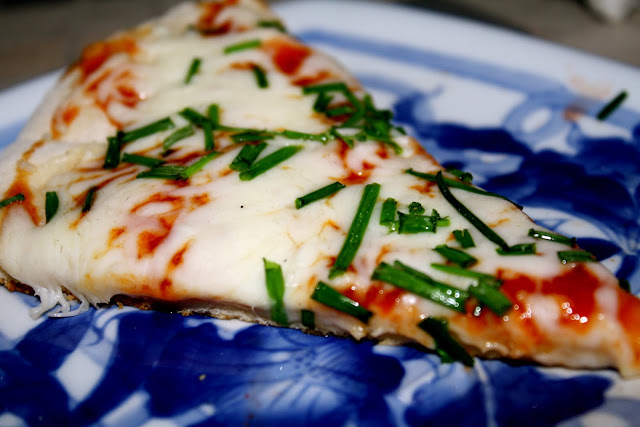 The final pizza was for Tracie. Last summer, when I picked up a bottle of Tabasco Sweet & Spicy sauce on the east coast, I made a pizza using that as the base, and she loved it. So I decided to do that again on the spur of the moment. (We were all so full by this point that I didn't think anyone was really going to care what I made, and indeed there remained several slices of this pizza. Maybe I'll have that for dinner.)

I also used the remainder of the chives, not because I thought they would add anything to the flavor, but just to make it prettier.

All in all, as you may guess, it was a great dinner. 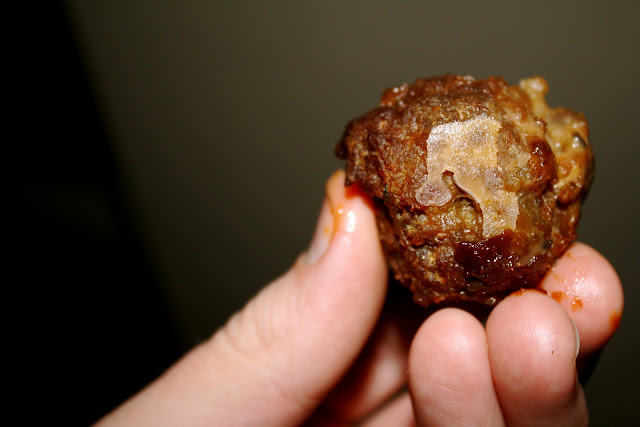 But the happiest moment was after everyone had left and I was putting dishes in the sink: I noticed that there was still one meatball left in the slow-cooker. Somehow I had overlooked that. Rarely have I been as full of joy as I was finding that last little Guinness-infused beauty. I got into bed. I said some words to the close and holy meatball, and then I slept.
Posted by JustinM at 11:41 AM

Are you freaking kidding me??? I would eat any of that right this second for breakfast.

Your pizzas are incredible!!! Have you ever thought about opening up a pizza joint? I love that toscano cheese from TJ soo much. I would kill for even your starter roasted garlic/basil pie.

Thanks for another awesome Friday read.

To be clear...Only the crawfish pizza sounded disgusting because I don't eat seafood. All the others sounded and were delicious.

We might need to look into the fact that you're talking to meatballs! The pizzas were amazing...as always.

dang tracie is a freak! was elizabeth jealous of the meatball?

Anon: If you live in South Pas and you have cash, we can probably arrange something.

Anna: I love making pizzas for friends and family, but I don't think I have any passion to do it for money... despite what I just wrote above.

TJ: Okay, that makes more sense, but it still hurt me deeply.

Liz: At least meatballs don't talk back to me.

Anon: Well, Elizabeth doesn't dislike my balls, but she doesn't like them as much as Tracie, so I think she's okay with it.

But we've always been very pro-calendar here at An Immovable Feast.

The crawfish pie was astonishingly great! When it first came to the table I was worried; I could smell the "seafood" aroma and don't normally like seafood in any type of Italian format. (My aunt used to make "pizza fish". It remains the most disgusting thing ever placed before me). So, when I took the first bite I was amazed at the delicious complexity of flavors and textures. Damn fine stuff! The Trappey's sauce was just an idea that panned out well.
Bravissimo!

I agree about seafood on pizza. I haven't liked any since the shrimp pizzas I used to eat at Giovanni's in Mammoth Lakes half my life ago. However I had a hunch that the crawfish and spicy sausage was going to rock.

It not only rocked, it rolled!

You crazy kids with your hipster patois.

pizza's looks so delicious .. thanks for sharing