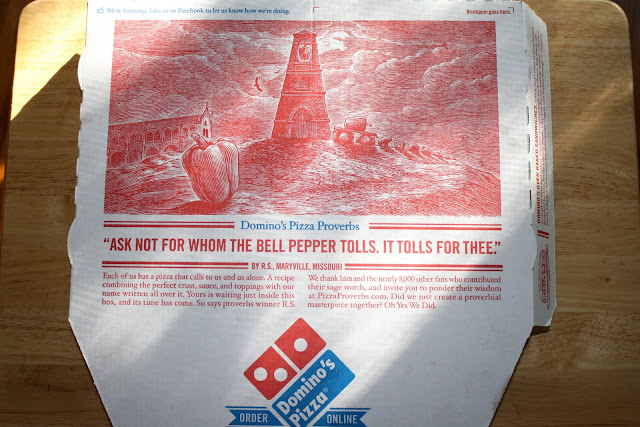 You may not have seen this one coming, eh?

With all the pizzas I cook on my grill, or eat at my friend Tyler's house, there just isn't any room in my life for Domino's and there hasn't been for a long time. How long? Nine years.

Nine years ago I lived with two of my high school best friends in Mid-Wilshire Los Angeles. Most Tuedays we ordered Domino's - it was their "Two For Tuesday" promotion; two pizzas for the price of one. And I never had a problem with it. Of course, my standards when I was 23 were not exactly high.

(Once we strayed from our Tuesday night Domino's routine: there was - and, I believe, still is - a place on Western called "2 for 1 Pizza Co." where their pies were always two for the price of one. On Tuesdays, perhaps to compete with Domino's, they offered a three-for-the-price of one promotion. We gave it a shot, but the pizzas were the biggest grease bombs I have ever seen. In my memory my stomach started to ache after one slice. The next week we went back to Domino's.)

Then we moved out of that house and my Domino's days were done. I started working in Sierra Madre and frequently ate at Sierra Madre Pizza Co., where the pizzas were cheap and delicious. A year later I ate Casa Bianca for the first time. Three years ago I moved to South Pasadena and discovered Mamma's; between that and my pizza stone for the grill, I haven't had much need for any place else.

Especially not a chain place. A few months ago I had Pizza Hut because Elizabeth was craving it - Pizza Hut has long been my least favorite pizza chain - and disliked it. But other than that, it has been a long time since I've had chain pizza. Even two years ago when Domino's made a big deal about having a new crust and a "sweeter and bolder" sauce, I had no desire to try it.

But I had a $10 gift card for Domino's and they have a promotion of two medium two-topping pizzas for only $5.99 each, so Friday night we decided to give it a shot. I ordered one pizza with sausage and extra cheese and one with pepperoni and green pepper (which was the pie my friend Tom and I always ordered nine years ago). I also decided to try the new boneless chicken that Domino's has been advertising for the last few months. 8 pieces were also $5.99.

The girl on the phone was super-friendly and efficient; I ordered it for carry-out and the whole process took less than 30 seconds.

"It will be ready in ten minutes," she said. I hadn't expected that.

"Can you make it twenty?" I asked.

Twenty-one minutes later I was at Domino's. (I ran in to get the pizzas while Elizabeth circled the parking lot; I never thought I would find a worse parking lot in Pasadena than the one on the corner of Lake and Orange Grove, but sure enough this one on Arroyo Parkway was worse.) They were in a heated bag on the counter. Subtracting my ten dollar gift card, the total out-of-pocket expense for two pizzas and boneless chicken was $9.74. Not too shabby. 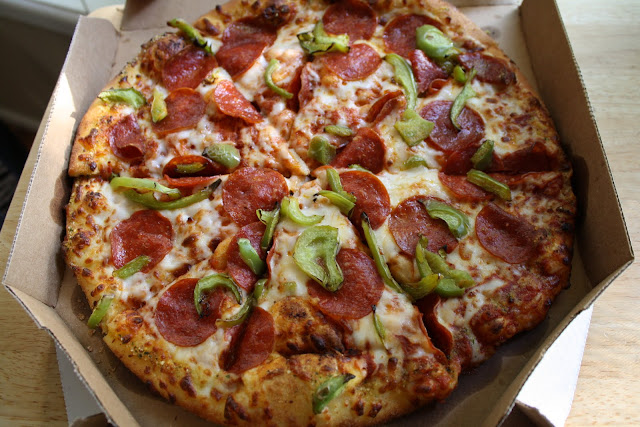 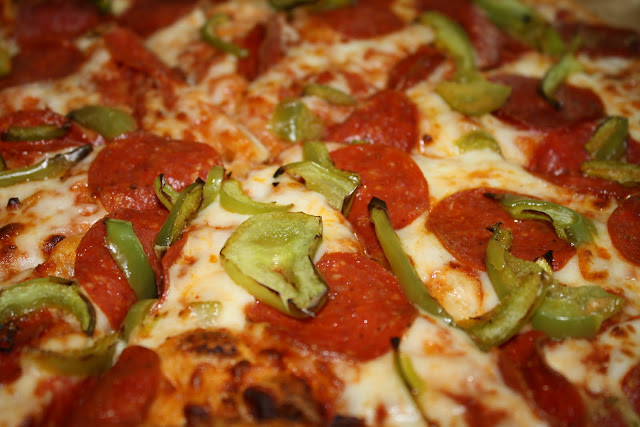 The pepperoni and green peppers were pretty solid toppings (although I'm not quite sure how you could screw up the latter) but that is where my enjoyment of this pizza ended. The new sauce did not taste any different from the way the old sauce tasted in my memory. Unfortunately, the crust did. The one thing I always thought about Domino's was: Well, at least their crust isn't the flavorless, wet-cardboard-tasting crap that Pizza Hut's is.

And now it is. 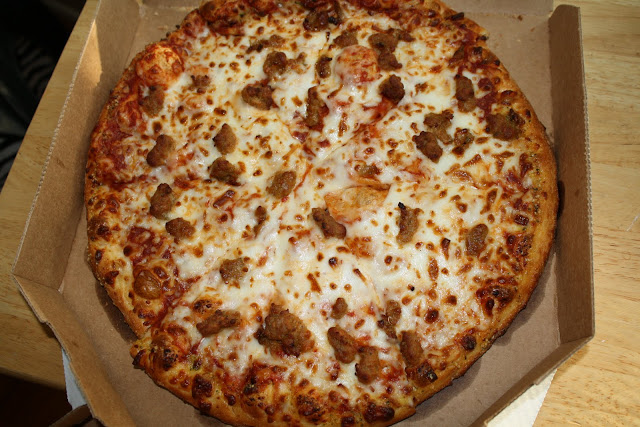 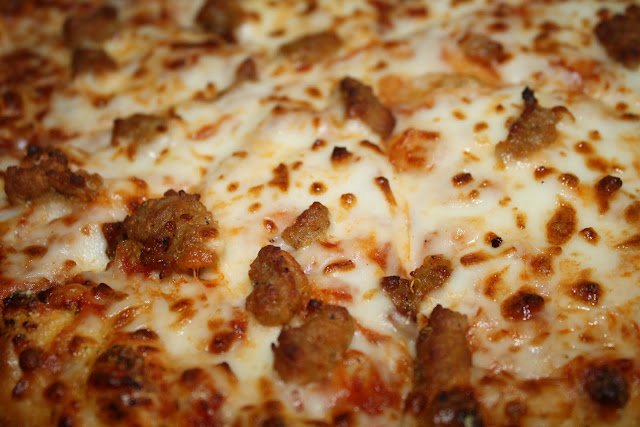 The sausage and extra cheese was much better, simply because the addition of more cheese slightly masked the flavor of the crust. The sausage, like the pepperoni, was better than I was expecting it to be.  But overall it still wasn't very good.

Now, was it bad? No. It's pizza. I've only had one slice in my life that I considered bad. But this was probably the last time I will ever again eat Domino's pizza. There are too many pizzas I love; there just isn't any reason for me to ever again order a pizza I do not really like. 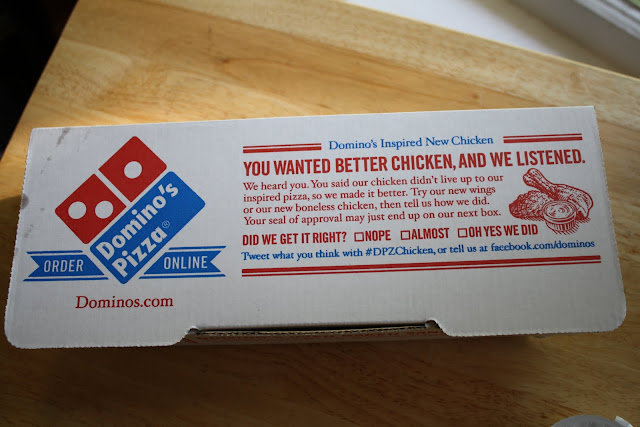 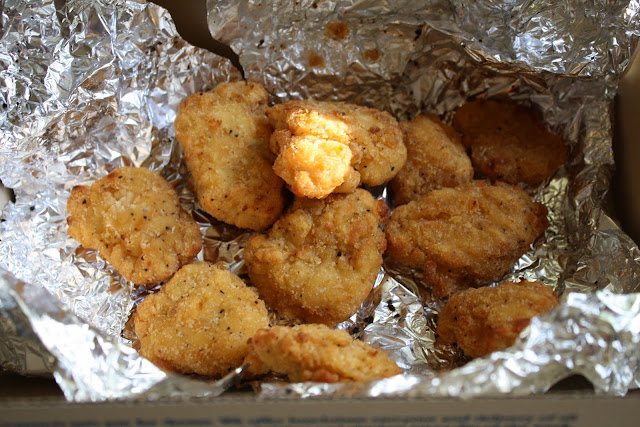 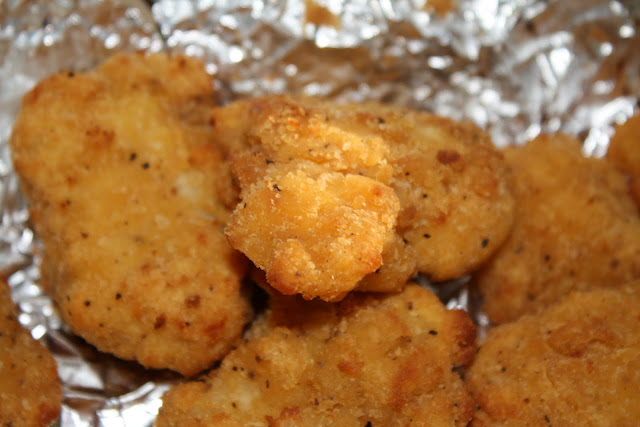 The chicken, on the other hand, was terrible. I was slightly excited when I opened the box and saw that there were more than eight pieces, like maybe I'd scored. 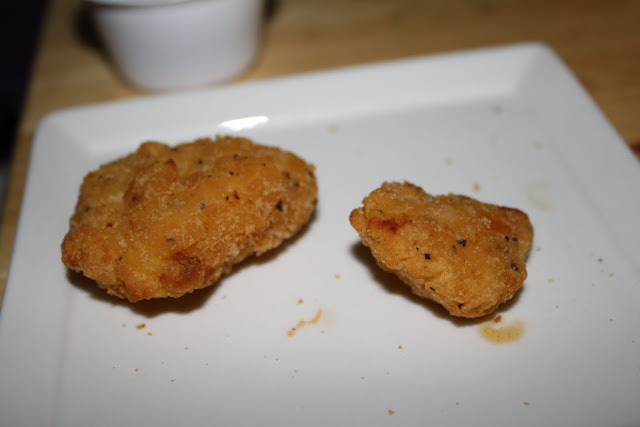 But some of them were tiny little pieces less than half the size of others. And, at any rate, they all sucked. The breading was the opposite of crispy: it was soggy. And the chicken was stringy and chewy. I never had a problem with the old "Buffalo Chicken Kickers" and with all the fanfare surrounding these boneless bites, I thought they would be even better. But they were much, much worse. Considering you can get twenty McNuggets at McDonald's for five bucks, eight of these lousy chicken pieces for six bucks is a complete rip-off. 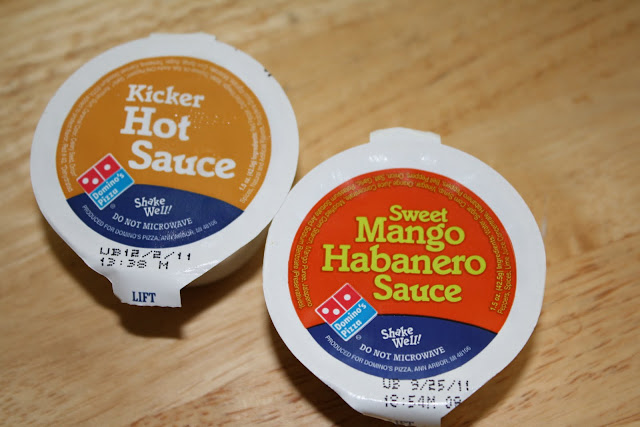 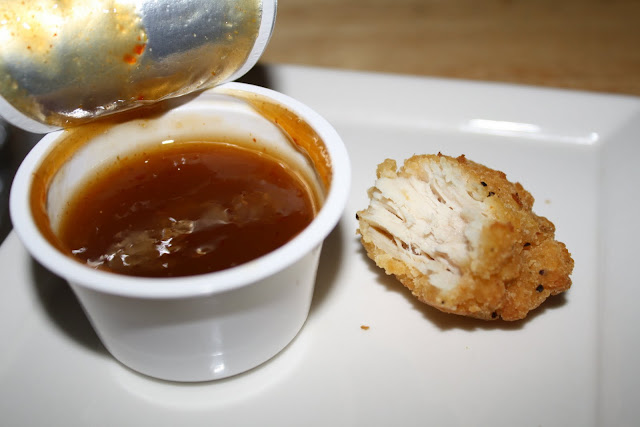 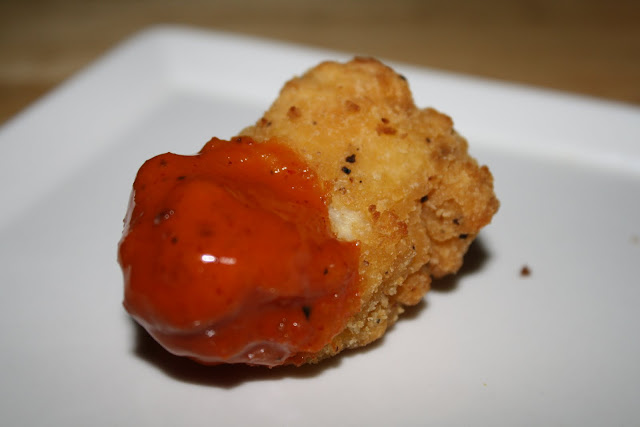 The one thing that I thought could redeem the chicken was the new "Sweet Mango Habanero Sauce." I was under the impression that this sauce would be two flavors: sweet mango and spicy habanero. I misunderstood the name. It should be spelled with a hyphen: "Sweet Mango-Habanero Sauce," because the whole thing was sickly sweet. There was no spice at all. I'm not sure how you use habaneros and come up with a product without heat, but Domino's has done it. I took a couple large swipes of the sauce, hoping that with such a big amount the slow burn of habanero would creep up on me. But it never did.

The "Kicker Hot Sauce," on the other hand, I thought was delicious. But not enough to save the chicken. I cannot implore you enough not to waste your money on these. In fact... 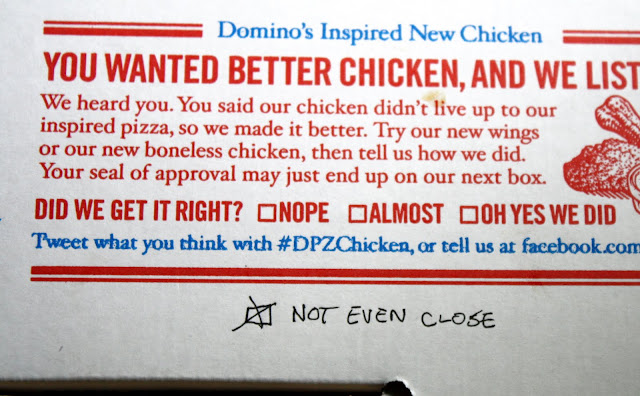 ... the options for rating the chicken were not enough; I had to add one more.

You should E-mail them and tell them about your experience. Maybe you'll get a commercial.

I honestly can't see the real appeal of commercial pizza joints. They're never as good as little mom & pop pizza shops to me, and both run around the same price. Maybe it's the ability to get a consistent taste anywhere you go?

However, when I was in Paris, the Domino's was Packed every day. At all times of the day.

It even kind of looks like Pizza Hut now!

Katie: Well, I know it takes all kinds, and I'm sure some people actually prefer the taste of these chains. And yes, consistency is the key; if you're in a strange town somewhere and you don't know if you can trust the local pizza places, you usually know how the chain places are going to taste - since all their stuff is made in central locations. But overall I think they are pretty lousy.

Michelle: Totally. I used to think of it as being thinner and much, MUCH better than Pizza Hut. But you're right, the swollen dough and fake-looking cheese is right out of the Pizza Hut playbook.